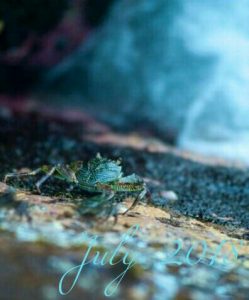 Happy Birthday Cancerians!! Wow, what a month we have in store for your Solar Return! Much is going on, but the focus will be in line with your Energy & it’s all about emotions. I’m sure you’ll be making chicken soup by the cauldron full & soothing hearts left & right, so please make sure you’re spending time for yourselves as well & celebrating in a way that truly nurtures your Soul!

For all of us though, welcome to Eclipse AND Retrograde Season! Most of the Planets are going backward throughout July & though many of us sigh, Winter is a good time to go within & reflect over the past few months & even years! I’d say of all the Planets, Mars is the one effecting us most now. He’s the Planet of action, the Planet which gives us our motivation & drive to get things done. Mars is officially Retrograde, until August 28th. He’s in Aquarius, an adventurous, futuristic Sign. Certainly, if you’ve been feeling jammed up & stuck, Mars Retrograde can slow things down but offer alternative ways forward. There’s a lot of talk about how this period is a “bad” one, but I don’t see it that way! If you’ve been flying along & trying to blast through seemingly unbreakable blocks, you’ll now have a chance to retrace your steps. Look down those paths you might have zoomed past or discounted as non productive. Mars in Aquarius is the Mad Scientist. He’s ultimately looking for the quirky, fresh, shiny & innovative BEST solution. Yes, this can take us to some strange, odd or uncomfortable places, but if you aim to live in the moment & explore, you could come up with a diamond. Remember the saying that truth is stranger than fiction & apply it.

Venus is in Leo, encouraging us to flaunt our Beautiful & probably spend way too much money on things. As long as you keep your head though, it’s a great time to upgrade your image in any way, be that your mane or your den! Sales have been extended & retail has their hands in your purse. A little extra spending on the things that make you feel good will… make you feel good! Especially in Cancer time. Venus has been having conversations with Mars too lately, these are the two Masculine & Feminine archetypes, so there may have been some battle of the sexes going on around you. If so, you’ll be glad to know Venus moves into Virgo on the 11th & is far less fiery & flamboyant. Toward the end of the month, She’ll meet up with Neptune & allow us to find new dreams & plans for our hearts.

Meanwhile, our Director of Communications, Mercury, is set to go Retrograde at the end of the month, on the 27th, in Leo. I’m sure you all know the drill so I won’t go on about it, but I’ll remind you to back up your data & go over your Calendars ahead of time, to get things clear & straight beforehand. He’s Direct again on August 20th.

Both Saturn & Pluto are Retrograde in Capricorn, so we’re still in the deep end with regard to questioning integrity, morals & ethics; setting our boundaries & contemplating the right/wrong use of power, both ours & “theirs”. This has been an ongoing “project” & is likely to continue until September. It may be tiring, but in the end, a fast fix would not have held or been your best way through. Keep calm & take one step at a time. Uranus is still settling into Taurus, so we’re learning how to ground ourselves in a new era.

& now for a bit of bright news! Our hero, Jupiter, will be moving forward again, as of July 11th, enlivening “stuff” which has stalled since March. Hoorah! All the fixed Signs can rejoice (Scorpio, Taurus, Leo & Aquarius). As Jupiter is said to be the Planet of Luck & Expansion, he’s sorely needed right now. He’ll be making great Aspects in July! In this first week you may find a tie back to events which happened at the start of December 2017 &/or late May, this year too. Due to the Retrogrades we’re not quite done until August 20th. Jupiter is all about our Souls, there’ll have been a slow but steady awareness of our Spiritual evolution & sorting through what’s real & what was really just a fantasy. In some cases that can prove tough, but then again, you don’t want to be living in some unstable Castle in the Sky.

As mentioned, we’re coming into Eclipse Season. Here’s where we start our next period of growth & realignment. Typically, we’ll be adjusting for the next six months, but the changes coming through will carry us for much longer. We have two Eclipses in July & another in August, we’ll discuss the latter then. With these first two, particularly the second one, there’s a real need to feel loved. Anyone feeling sad or isolated can honestly use some thought & support toward the end of July & indeed during these next few months. Thankfully, it’s becoming far more recognised that depression is often the end result of our anger & frustration being turned inward & the Scientific world is coming up with new ways to address this. For ourselves though, we need a healthy way to express these emotions, without blowing our lives up! Try to find something which works for you… try writing out what’s bothering you & implementing some exercise. Physical movement burns off energy, in general. With the Mars aspects that are occurring for the next few weeks, many will be feeling very frustrated & a sense of hopelessness can result. I’m sorry to sound so heavy here, but it’s no use sweeping the tougher side of life under the carpet! Because the Sky is SO full on, I’d rather bring all this up to prepare us, so we can come from an informed, higher place & deal in a constructive light. After all, that’s really the best form of Astrology there is! Please strive to be kind to yourself & stay as positive as possible for those around you too. Check in on people you know are struggling & show them they’re loved.

The New Moon on July 13th, is a Partial Solar Eclipse in Cancer, at 13:01, @20 Degrees. Again I’ll suggest you check out your own Chart to see where this Eclipse is occurring & which area of your life is up for change. Pluto will be involved & so this Eclipse will be very transformative, right from our core. But it’s liable to be a positive time & your surprises good ones! As we know, Cancerian energy revolves around our Family, kids, pets, friends & humanitarian pursuits. It focuses on home & hearth as well as our past… our ancestry & roots. Above all, our heart & our feelings come into frame & our emotions COUNT! Make your intentions ones which emotionally nurture you. How can you strengthen bonds? With yourself & with those you love? How can you make your space a place you love to be?

The Full Moon on the 28th, is a Lunar Eclipse in Aquarius, at 06:21, @4 Degrees. As the above Solar Eclipse tends to bring something new into our lives, a Lunar Eclipse tends to offer us a wrap up of something old. It doesn’t necessarily have to be a total ending, full stop! It can be the end of a certain stage & you’ll know where you just can’t sit with something any longer. How you perceive the incoming shifts will depend on your own make-up, of course. Some Signs tend to dread the sound of that, whilst others are all “Bring it ON!” Whichever way you see it, remember Energy is neutral until we give it an aim… we can choose how we work any changes that come through to us. In many ways, we’re being offered an escape! The proviso is that you let go & aim for your future… aim to liberate yourself & get going toward a better way of life. By now we’ve already had a couple of years of this Energy & have gained a strength we never knew we had. Stay centred & if you have a few intense, gnarly days, know they’ll pass! Look after yourself… put your OWN oxygen mask on, before attempting to go into the fray & help others. The Moon being in Aquarius, asks us to use our heads over our hearts, easier said than done sometimes, I know. This will be a challenge, as the Sun will be in Leo, a Sign which is heart driven! The key here is to know how you feel but to frame it through thought & maintain detachment in your actions & words. That Retrograde Mars is tightly tied to this mix, tension & anger can bubble up SUDDENLY, so please be extra careful when you’re out & about, especially when driving!!

Seraphinite seems like a great Crystal for this month. With it’s silver & green colour, it reminds me of the connection between Heaven & Earth. Said to connect our emotions with our bodies & improve diplomatic communication, it will help you find your flow & speak in a way that’s positive. Many believe this Crystal heals “stuck” energy in the spinal cord & strengthens our blood, therefore regenerating us, right down to our DNA! It’s a rather personal Stone, so keeping it close to you (pocket or bra!) rather than in your surroundings, is the way to go. Given time, it’ll help you align with your lighter & more joyful future self. Seraphinite is a well known Spiritual, Emotional & Physical healer… mending we can all use during Eclipses.

Happy July Everyone… I’m wishing you a great start to the second half of the Year, even though it still feels like we’re only at the beginning. If we all aim to make Love, not War, we’ll come through in shining colours!! Many Thanks to Oleksandr Pidvalnyi, on Pexels, for our July Image!!

You can find Seraphinite in its many forms at Sacred Source & you can book a Personalised Astrology Consultation or Tarot Reading with Tiana, or any of our other gifted Readers, by calling the shop on 9509 2421. We’re open 7 days =)