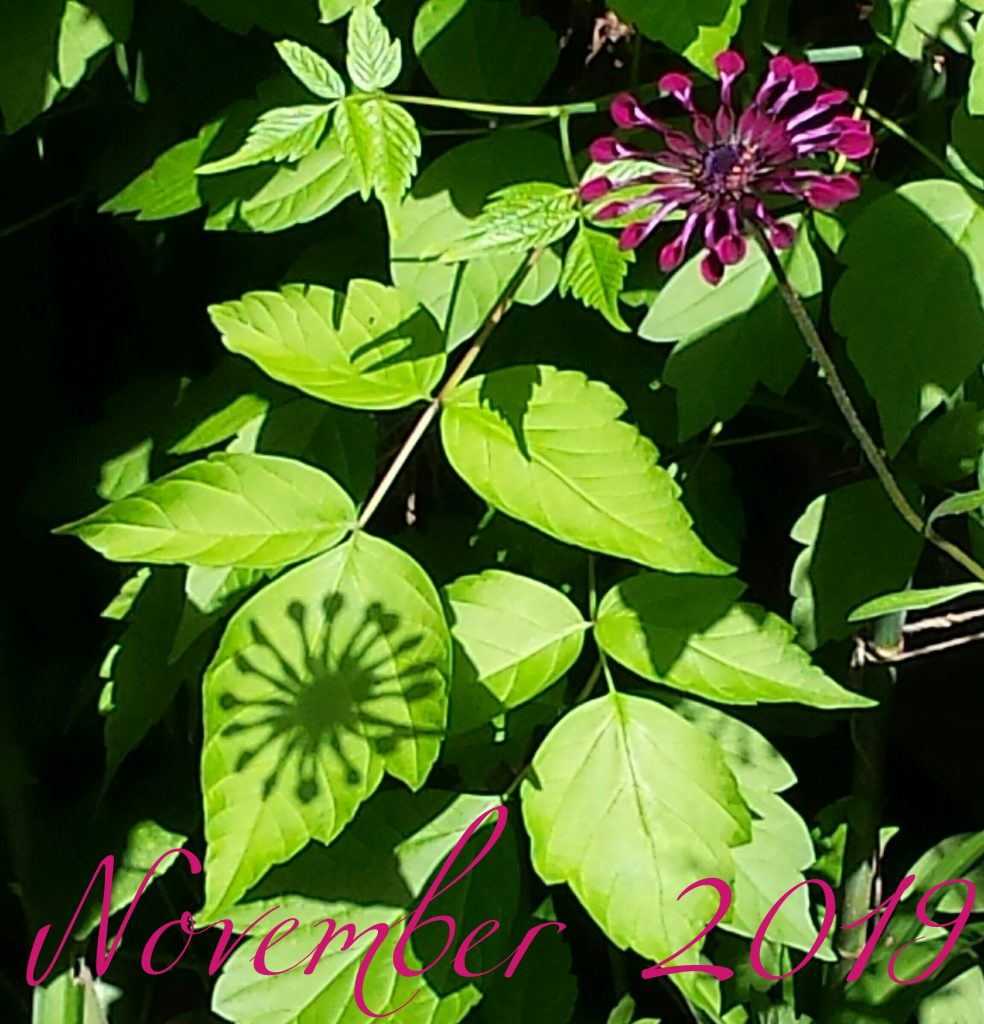 Catching our balance following those last two weeks of October, we have a somewhat calmer, “nicer” Month to look forward to. The pace has been fast & furious for many of us, the trends in the Sky are no different & the Astro configurations we’ve passed through have been intense. Uranus, our Planetary Change Agent, sprung a few sudden spanners & surprises our way, but He’s had His fun for the time being. We start out with the last of our challenging Aspects, with Warrior Planet Mars in Aspect to Pluto, Lord of The Under World. This configuration is asking us to integrate & transform the realisations we’ve all been having. As last Month posed somewhat of a Heavenly Challenge & much of the news we’ve heard may not have been great, at least we’re fairly clear where we stand. Now, we have November to wrap up the grapple & settle down a bit to think things through.

Mars talks of our motivation. He’s responsible for our drive & the actions we take. As He was travelling through Libra, He will have shown us the “other side” to many a story & offered up a fairer, or at least more balanced view. He Aspected Saturn, pointing out rules & regulations, He showed us our “have to’s” & then He travelled forward. Saturn is actually very well supported throughout November, Hoorah! But I digress…. & going back to Mars, now He comes to Pluto, Ruler of Scorpio & presents the next part of the equation: what we want to DO with our recently recognised subconscious beliefs & how to transform them for improved outcomes. Pluto gives us a BIG push to look inside ourselves, to SEE our inner most unavoidable secrets (Scorpio!) & asks which bullets we want to bite. In the first week of this Month, we’ll need to do a little more work on what we truly represent & what we’re willing to stand up & fight for (Mars). One of the reasons I believe this is actually a GOOD thing, is that our last New Moon, on the 28th of October, was also in Scorpio & as with all New Moons, this has offered up momentum for a fresh new phase. Yes, there is MUCH Energy being placed on upping our game in a very personal, almost sacred space, but hey… if change is inevitable, the better way to approach any shift is by starting quietly. Work out how you feel before you speak up about it. What outcome do you ultimately want for yourself? What action/s will it take to claim Victory?

Furthermore, as mentioned last Month, Mercury is officially Retrograde in Scorpio too. He’s been in Shadow since mid last Month, highlighting what our focus will be. He’ll be going backward from the 1st of November through to the 21st & then we’ll be on our way with what we’ve gleaned, on December 8th. Of course there’ll be the usual communication & technology fails & as always, we’ll need to keep our minds on our keys, cars, phones & appointment books to avoid mix ups. BUT, to me, in view of what we’ve touched on above, this Merc Rx appears to be a positive one in general. Whatever matters arise, Mercury Rx in Scorpio will allow us the gift of X-ray vision & Super Powered insight to deal. If we’re open to it, we can really plummet to the depths of anything gnarly, dig up buried or hidden “stuff” & mine for gold whilst we’re reviewing, reframing, re-evaluating, reassessing & revising (apply all good Retrograde “re” words & principals here). We’re totally supported in sifting through the soot & getting to the bottom of things by the end of November. Pace yourself, take your time… work off the “if in doubt, don’t” proviso & wait until you gain clarity before outwardly manifesting or taking action. Ask questions of yourself & others & you’ll get where you need to be.

Venus is becoming lighter & brighter, as on the 1st, She moves into Sagittarius. She too spent her time journeying through Scorpio, ahead of the pack. As She holds our hearts & helps us work out what we truly find valuable & worth investing in, She’s really put us in touch with our feelings & what we need to make us feel whole & loved. In Sadge, Venus is not plagued by boundaries & isn’t pinned down with some narrow minded view. She lives in hope, She’s inspired & Spiritual. She believes Love conquers all & Her philosophies are idealistic, radiant, glossy & glory-full. In a Fire Sign, She has all the energy & spark she needs to fight for her beliefs. As such, She’ll counter much of the above, offering a more buoyant & optimistic outlook throughout the Month, until the 26th. Before She shifts into Capricorn, She has a couple of beautiful days, where She’ll be teaming up with Jupiter, Ruler of Sagittarius (24th & 25th). This usually serves to inflate (Jupiter!) how Venus feels. These two are considered to be our Planetary “Benefics” (meaning fortunate), so we’re assisted in our search to find the right mix of our ideal & the practical manifestation of what satisfies us.

Toward the end of the Month, Neptune in Pisces turns Direct (25th). He’s been back tracking since June & although His influence as an Outer, Slower moving Planet is quite subtle, He does play a large role in our Bigger Picture & over reaching story of life. Quite timely that He starts gearing up again now, as He deals with our emotions, our inner worlds & dare I say it again, our subconscious patterns & beliefs. I like the idea that He wakes up just following the above Scorpio Season & we’ll be able to gain much progress & connection between our internal & external Worlds. As Neptune is ethereal, psychic & intuitive, the lessons we’ve learned during His Retrograde will become embodied & part of us & we’ll be able to start acting from an even higher perspective & understanding than ever before. High octane, heady stuff folks!

The Full Moon is on Wednesday the 13th, at 00:34, @19 Degrees of Taurus. Fortunately, Mars will have marched past Pluto by now & He’s in good formation with Jupiter. Both The Sun & The Moon are playing very well with Pluto & Saturn is making positive Aspects to Neptune. Often this can result in the dissolution of a straight jacket! But what of Taurus, the essence of this Full Moon? As an Earth sign, Taurus represents your body & physical space… literally your stomping ground! Revelations & conclusions to past home projects usually abound on these Moons. There’s usually a theme of value & worth, including your financial status & goals. Ways to improve your income might suddenly appear, so keep an eye out. As Taurus is a Venus Ruled Sign too, our senses should be in sharp focus & we can use them to better our sensual World. Attuning to what we see, hear, smell, taste & touch will help us really tap into how we can spruce up our creature comforts & how we can bring more pleasure into our environment. Though many will be feeling a little quiet during Scorpio Season, this may still offer up a great time for a low key dinner or get together. Hanging out with people we love is likely to be revealing & inspiring. Comfort on a Taurus Moon is key to nourishment.

The New Moon falls on Wednesday the 27th, at 02:05, @4 Degrees of Sagittarius & is also a “goodie”, with Saturn still conversing well with Neptune & Mercury, now moving forward again, also Aspects Saturn in a positive way. A Sagittarius New Moon is always encouraging of some Fiery New Starts, but we get an extra boost with Mars Opposing Uranus for a week or so. This will jump start us again, heading into December & the inner musings we’ve been doing are likely to start manifesting outwardly now. As always, check the House in your Chart Ruled by Sadge to see where your fresh starts are best launched, but either way Sadge Season is well & truly launched! This Sign is high minded & has it’s eye on the horizon… our Spirits may become a little wayward! Used positively though, we can discover, expand & explore totally new subjects themes & ideas. Initiating new projects & activities, thinking outside the box, expanding our philosophies & theories all have draw, going on a day trip or some other adventure will really help inspire & lift you up. If you poke around outside your every day “usual” haunts & routines, you’re bound to discover some sweet spot you can escape to & grow. You can “squeeze out” this influence all the way through to the Sadge Full Moon next year if you invest now. Jupiter, Ruler of this New Moon, has spent the past Year travelling on His home turf, in Sagittarius. In December, he goes into Capricorn & won’t be back for another 12 years or so! We’ll appreciate a good place to spend creative “me time” in, over the coming Months. Try to find that niche/ space/ place now coz you’ll thank yourself later.

In conclusion, I guess Scorpio Season can be a little like going into a cave or a mine. Some of us may be freaking out at the idea! But as it’s unavoidably on our path, know we’re going in & through equipped with the BEST tools & maps to do so. In the dark, you need to work intuitively & to *Listen* to the gut feelings we’re ALL gifted with. Have Faith, shine your torch inward & once the light appears at the end of the tunnel, you’ll have learned so much about yourself & your inner compass you’ll be stronger & more invincible than ever. Truth!!

Over the coming weeks, we’ll be served well by Rainbow Obsidian. Known as a “Truth Stone”, in true Scorpio style, it allows us to see into our depths & not only understand ourselves better, but clean out a troubled mind. Often our perception of who we are gets clouded by negative patterns of thinking. Obsidian is known to bring up truth & clarity from our core beings. As with many of the dark coloured Crystals, Rainbow Obsidian is grounding & protective, it’s a wonderful Stone to have around you in instances of shock or trauma too. Said to be boundary-less, this stone works to “move things around” in your system, releasing stagnation & blockages, be they physical or mental ones.

Before I go, many thanks to Lillian Marion for her lovely comment on last Months post, much appreciated!

You can find Rainbow Obsidian in it’s many forms at Sacred Source & you can book a Personal Astrology Consultation or Tarot Reading with Tiana, or any of our other gifted Readers, by calling the shop on 9509 2421. We’re open 7 days.