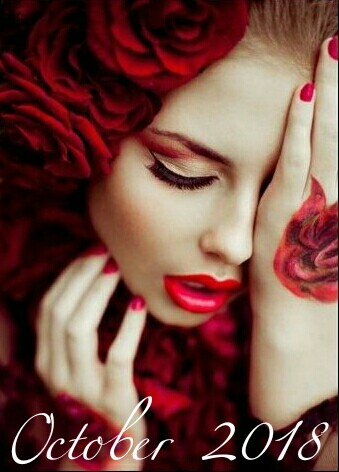 Welcome to October & Happy Birthday Libra! This is a Venus Ruled Month & not just because The Sun is in Libra, or that Venus is Retrograde, but both the New & Full Moons are Venus Ruled too! Venus holds sway over what we love & how we like to be loved, as well as what we find valuable & how we express our creativity. She governs all our relationships & partnerships, as well as our wealth & reputation.

Actually, Pluto has a lot to do with our wealth too & He’s going Direct at the start of this month. As Venus is in Scorpio, Ruled by Planet Pluto, you can see we’re in for some intensity with regard to both love & our bank accounts. When Pluto shifts out of Retrograde, the mode He’s been in since the 23rd of April, He’ll likely bring in some of the missing pieces of any puzzle you’ve been trying to solve since then. Venus Retrograde will be bringing a few of Her own past issues up too, so hold onto your hats folks. Venus in Scorpio deals with psychology & transformation, so what’s been ticking away, deep within you? She’s very much about how we relate & depending on your situation, She may be thinking about committing to something or someone more deeply, or She may want to axe it from your life, once & for all. Scorpio tends to be black or white, hot or cold… there’s not too much of a gray area with this Sign.

With both these Planets in the spotlight with regard to finances, it’s a great time for salary reviews, refinancing investments or insurance, taking an in depth look at any of your assets, loans & things you have to pay off & making sure you’re up on the best deal you can find with regard to interest etc. Tax & pensions fall under this umbrella too. Venus can help you renegotiate contracts & your business partnerships as well as your personal ones, as She is The Queen of Diplomacy & Charm! Just double check you’re not being TOO ruthless or intense, the line can be a fine one when politicking at the moment. Pluto is Direct Until April next Year, Venus turns Direct, thankfully much sooner, on November 17th. Use this time to really dig down & research, so you’ll know exactly what you want to invest in, when She goes forward. Though Venus Rules over beauty, keep in mind as She’s Retro, it’s not really a great time to totally reinvent your look. She can be fickle & what we think is a fantastic idea right now might not seem so, once She goes Direct. So hold off until the end of November for hair cuts & beauty procedures if you can.

I’d be remiss if I didn’t mention that a classic Venus Retrograde is well known for bringing back past loves. This could be them returning to your mind, or your inbox, depending! The idea is that we get a second chance to look at things from an experienced & wiser perspective… we don’t necessarily have to act on anything. If you were left with questions, Venus in Scorpio works extremely well in getting to the bottom of things.  She offers a deeper perspective & can help release your pain & heal your heart. Where situations or people have changed, there could be a chance to reinvent a relationship, but in rehashing everything, don’t gloss over why the relationship dissipated in the first place. Forgiving & forgetting are all very good, but before taking any action, remember an ex is an ex for a reason! Whether you’re meant to reunite or not, this is a great time to get closure once & for all. You might be the one reaching out, or they may be… whatever the case, I hope you’re able to free yourselves from any ball & chain you’ve been dragging around.

This month, we don’t really have any Planets in Fire Signs. That’s a plus because we’ve all been running around with not enough hours! We do have a fair amount of Earth & Air Energy though, so that’ll help us to ground & think clearly. Mercury, our Planet of thought & communication is busy in beautiful Libra, tasking us to look at all sides & make fair & balanced judgement calls in our day to day. Use His Energy to socialise & further your cause early on in the month, as He decamps in Scorpio around the 12th & He’ll likely be adding to the above mentioned intensity. Mercury will Conjunct Jupiter at the end of the month & will likely bring in some BIG news or revelations. As Jupiter’s exuberance is involved here, be careful not to over expand your reaction or inflate what you say… it could come back to kick you in the proverbial. For those who follow His Retrograde Cycles, heads up… He’s going into Shadow on October 29th.

Mars is in Aquarius & I’ll mention another heads up or two here, though He’s FINALLY Squaring Uranus for the last time for now, around 2nd of October, He’ll be triggering the Eclipse point again. This means that sudden news harking way back to the end of July can pop back up. As Uranus is in the picture, it’s possible to get caught off guard due some “unfinished business” you didn’t know you had! Take your time to think things through before taking any action. Another hot spot could also spring up on the 12th too, as He’ll be Squaring Venus. This is often said to be a Masculine Vs Feminine Aspect, but in general it can cause sparks to fly anywhere in life. Where there’s tension, you’re better off counting to 10 than flying off the handle & initiating some conflict/power struggle which could escalate disproportionately.

Jupiter, drilling away at all things repressed & suppressed, is heading into the last 10 degrees of Scorpio now. He’s been here since October 2017, has done his Retrograde thing & come Direct… & is now leaving His Shadow, on the 7th. It’s believed that at this point, He finally brings in new opportunities in the area of Your Chart He’s been travelling through. He hasn’t been here for 12 years & won’t return for another dozen, so I hope whatever you’ve been toiling away at, finally hits pay dirt!! Even if you’re not aware of which House He’s traversed, just know in general, you’re due a break somewhere in your life & it’s about time. Saturn is still being his crotchety self in Capricorn & Uranus is Retrograde in fellow Earth Sign, Taurus. I’ll mention them when I get to the Moons below. Neptune is sailing along in Pisces, periodically fogging our windscreens, causing Mercury Ruled Gemini & Virgo fits of temporary memory loss & Pisces & Sadge to daydream inappropriately, but then that’s nothing new!

The New Moon this month, is on Tuesday October 9th, @15 Degrees Libra, at 2:46pm. As Libra deals with our relationships, love, sense of fair play & balance, this is a great New Moon to make a fresh start with your heart! What’s out of line in your life? What can you do now to realign it? Opportunities abound. Take a look at your finances & budgets, they can probably do with some realigning as well. Mars is Square to Venus at this time, so sexual tension or off tap chemistry could abound, depending on where you’re at! At the same time, Venus Trines Neptune, which is a HIGHLY romantic Aspect, keep one foot on the ground but dare to dream away. Plan a great dinner, listen to some cool music & spend this evening looking on the bright side. Think outside the square with Mercury opposite Uranus because it’s also a great time to innovate & come up with some truly inspiring thoughts. Saturn is also making a harmonious Aspect to Uranus, which means there’s a good level of stability here to ensure those fresh ideas get traction! As long as you’re thinking along the lines of “out with the old & in with the new” success can be yours.

The Full Moon is on Thursday, October 25th, @ 1 Degree Taurus, at 3:45am. A Full Moon is when the Moon in the Sky is directly opposite the Sun… The Moon side of this is Conjunct Uranus, whilst the Sun is Conjunct Venus! I’m thinking this may amount to some BIG surprises coming our way. As Full Moons are a bit of a wild card, it’s hard to predict what they might be & with Uranus so strongly in this mix, it’s always something unexpected. Add to Mars Squaring off with Mercury & the situation, once again, can be pretty out there! It can be a mishap Aspect too, so please take extra care when you’re out & about, especially when driving, as people are likely to be hot headed &/or distracted. On a happier note, we DO get a dose of “good Saturn”, mitigating the above somewhat. Stay sensible & focus on taking the higher ground with anything that flares up. He offers us an anchor here & Mercury is having a constructive conversation with Pluto too, so aim to transform your path for the better, leave the drama out & you’ll get through just fine!

In View of this being SUCH a Venus Ruled month, I’ve chosen Kunzite as our Crystal. Said to be a Stone of emotion, its vibration draws love to you, whilst helping heal emotional difficulties, negative thoughts toward relationship & above all, releases the panic or fear you may have experienced via trauma to your heart. Looking at its beautiful lilac pink colour you can immediately feel its gentle vibe instilling warmth & trust. As Kunzite opens our heart Chakra, it assists in connecting to our flow of abundance & creativity, bringing us back to our balanced & better selves!

You can find Kunzite in its many forms at Sacred Source & you can book a Personal Astrology Consultation or Tarot Reading with Tiana, or any of our other gifted Readers, by calling the shop on 9509 2421. We’re open 7 days.